skip to main | skip to sidebar

Here's an error message I got the other day when I mistyped a password:

When a Unitard clearly isn't going to be be big enough ... ladies and gentlemen, step right up! 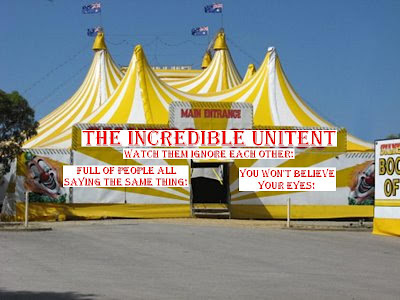 Tent erected in honour of the poo germ spray page at PAN.
Posted by Troy McClure at 3:46 PM 2 comments:

The apple not falling very far from the tree

You know how sometimes you're struck by a similarity between your own behaviour and your parents'? Like for instance, if I'm making a round of drinks for a few people, I know I'll forget which is which if they're in random order, so some years back I got into the habit of just arranging them alphabetically. OCD you may say, but it keeps me out of trouble. Moreover, in the modern world, you're more likely to know someone's given name than surname, so I alphabetise by given name. A year or two ago, I found out my mother does the very same thing. Surely that can't be very common?

Anyhow, more recently I was tickled to see this. This came at about the end of my song parody heyday, and a month or two after we were talking about Truss' book on PAN. I hadn't discussed either of those things with my mother, so it's a total coincidence ... or genetics!
Posted by Troy McClure at 10:42 PM 2 comments: 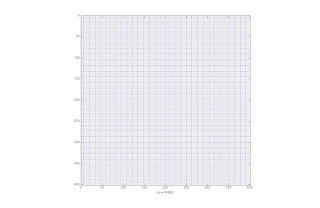 There are forty thousand dots in this picture. One for each post at TMHQ so far.
Posted by Troy McClure at 4:17 PM 9 comments: 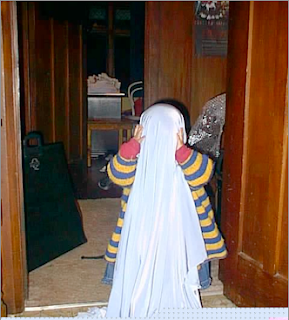 Firstly, I've had some data integrity trouble with the photos of the one thing I ever knitted, a coat for my first kid. So the bottoms of these photos are missing. Sorry. But here's my daughter pretending to be a ghost 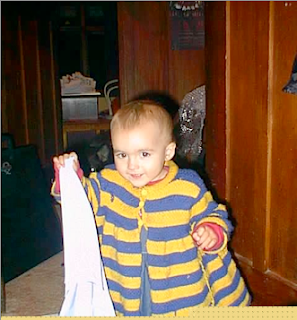 , and then peek-a-booing. This coat took a very long time to knit, because I had never knit anything before. It was arguably an unsuitable project for a beginner. Still, I enjoyed doing it & I love these photos.

Also, while I'm at it, I'll post the best painting I've ever done. I'm not much of an artist; I'm the artistic dunce of the family. But a couple fo days ago I got roped into joining in when my concubine & our daughters were painting, with this result: 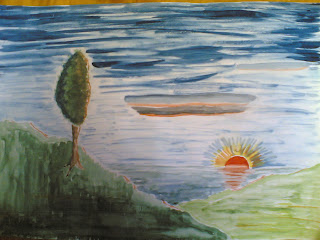 Lastly, a passive-aggressive reply I got from the computer algebra package Mathematica a couple of days ago. I'm not sending this to Kerry, because I doubt it will be everyone's kind of thing, but maybe someone here will see the funny side. I had a system of equations I wanted to solve. These equations involved complex variables and their conjugates (that is, variables from the complex plane and their mirror images reflected through the real axis). I entered my equations into Mathematica which, like Maple (which I had tried first), was unable to solve them. But whereas Maple had just said "sorry, I can't solve your equations" or something like that, Mathematica tried to blame me:

What I'd like is to know what all the solutions are, but I'll have to live on in ignorance. I did manage to find a couple of solutions by hand---though evidently, whatever I was doing, it wasn't really "algebra".
Posted by Troy McClure at 11:12 AM 7 comments:

This is an animation I've produced this week to help illustrate a couple of concepts from Operations Research (a branch of ... let's say mathematics). I don't know as I write this whether the image will be shown as an animation. If not, you can probably just download it and open it in Quicktime or whatever. That might be preferable, anyway, since you're supposed to be able to slide the line back & forth with the slider & see what happens. I should compress the image for the web, I know, but I don't know how, sorry.


Loosely, the red lines show the contours of some objective you're trying to achieve, e.g., profit. So the various points on the graph represent various business strategies, and the further northeast you get, the more money you're making. But you can't go into the yellow regions, because of various constraints; each of those lines represents a constraint, probably due to your having a fixed quantity of some resource.

The animation changes one of the constraints, to show how the amount available of that resource affects the profit you can achieve.

Maybe I'd better leave it at that for now!
Posted by Troy McClure at 3:40 PM 2 comments:

With the right attitude, you can't fail

This story's about 8 or 9 weeks old now. I went with my family to Aotearoa for 6 weeks over xmasny, and this is the story of our taxi ride to the airport, at the start of our holiday.

The taxi driver was a cheerful, friendly fellow with a heavy Eastern European accent. Right at the outset, he asked us if we'd mind stopping at a petrol (= gas) station on the way. We had left in plenty of time, and the fare was fixed in advance, so of course we said fine.

He asked a few questions and told us a bit about his life, & at first it was pleasant. However, it's a long way to the airport from our place, & as the conversation wore on, the driver latched onto my 15yo stepson in a fairly misguided and very irritating way. He began to exhort him to work hard at school. That doesn't sound so bad, of course, but it was the way he went about it: "My sons, when they went to university, they never have girlfriends. You know why? They too busy, study, study, study. Now, one is an accountant, the other is a manager. Now, they have fifty girlfriends. They have nice car, nice clothes, they go into a nightclub, any girl there will want to talk to them. I talk to you now like a father, I give you good advice, you listen, you study hard, when you're twenty-five, you'll have very nice car, you can really enjoy life." And on and on and on.

Now, I know, attitudes to material success vary greatly. To my stepson, I'm sure, that sounded like a nightmarish future. But he's a very polite young man, and managed---only just---to feign interest. Eventually we got to the petrol station, & it was quite a relief, because the driver went inside, and concubine and I were able to commiserate with stepson and give him the strength needed to withstand the remainder of the onslaught.

Anyhow, until we got to the petrol station, we were assuming, as probably are you, dear reader, that our object there was to buy petrol. Evidently not. The driver went inside for three or four minutes, came out, resumed driving, got on his cellphone & had a quick conversation with someone about the errand. The only thing I really made out was the line, "He wouldn't sign it. No. I don't know. He wouldn't sign it."

The driver then advised us that there was some accident or roadworks or something on the usual route, & that it would probably be a lot quicker to go another way. I don't know Sydney's roads very well, & we weren't in a hurry anyway, so we said fine, whatever. So we took the alternative route, and it turned out to be very slow, with very heavy traffic. Our punctual arrival at the airport was never in jeopardy, which is just as well; otherwise, I might not have been so amused by the logical dubiosity of the driver's repeatedly indicating all the traffic and saying, self-congratulatorily, "See? I'm not the only smart!!"
Posted by Troy McClure at 5:17 PM 3 comments:

Where shall I go? What shall I do?

Troy McClure
I lived in Massachusetts until I was 14, when I moved (with my parents & brother) to Christchurch in Aotearoa. I subsequently worked out that I vastly prefer Wellington. Unfortunately, work has me living in Sydney, where I teach mathematics & similar at a university. My concubine is an extraordinary, beautiful, talented, hilarious & thoroughly delightful woman of about my age. We've got three kids who are also wonderful. I like to try to play (and sometimes write) music but sadly cannot sightread.

Concubine: The woman I love, the mother of my children. I have used this term since once, chatting with a Parisian guy at a conference, I was talking about her & mentioned "my partner." He stopped me to ask what that meant. I said, "well, you know, we're in a de facto relationship; we live together, have kids together & so on, but we're not actually married." He said, "ah, yes, okay, go on." I was just about to go on when, fortunately, I thought to ask, "how do you say that in French?" He said (what sounded to me like) "concoobeen." I thought that was hilarious because, of course, in English that sounds totally medieval. Anyhow, we're planning to marry on 2 January 2010, so I'm using the word "concubine" at every opportunity while I still can.

Deeply Carved Writings: I could aspire to depth (though I promise nothing) but carved writings? Like so many before me, I've chosen an essentially arbitrary blog title, but see here for the term's provenance.

PAN: Such an evocative word. Since classical times it has stood for madness on the one hand and "everything" on the other. Twenty five centuries later, we have www.passiveaggressivenotes.com, my madness, my everything.

The Prophecy: I started my current job in January 2004. At that time, I was teamed up with a desktop PC at least 6 months old. We have, it is said, a three-year replacement policy for computers. IT's current plan is to replace my PC with a laptop. It seemed to someone at some point like a reasonable idea to try to buy in bulk, and so for some while IT has been negotiating with possible suppliers about what will turn out to be quite a big order. Due, though, to the order's size, management insists that three fully detailed and exactly comparable quotes be obtained for this complex order (involving different sorts of computers & service packages & so on). And I gather there are other equally maddening administrative hoops IT's having to jump through. Last time I spoke with the IT guy about it, I said, "It'll be this year, though, won't it?" The answer was too long to include here, but it began with a wry chuckle.

[Update, July '08: The Prophecy hath been fulfilled. A big improvement, and none too soon.]

Troy McClure: Not my real name. You might remember Troy McClure from such series as 2 through 10 of The Simpsons. I like The Simpsons as much as the average blogger, I guess, but the choice of the pseudonym "Troy McClure" was made in the heat of the moment in one of my first posts on PAN. Because, like Wade before me, I was mainly inspired to blog by PAN & my friends there, it seems natural to carry that pseudonym over here.